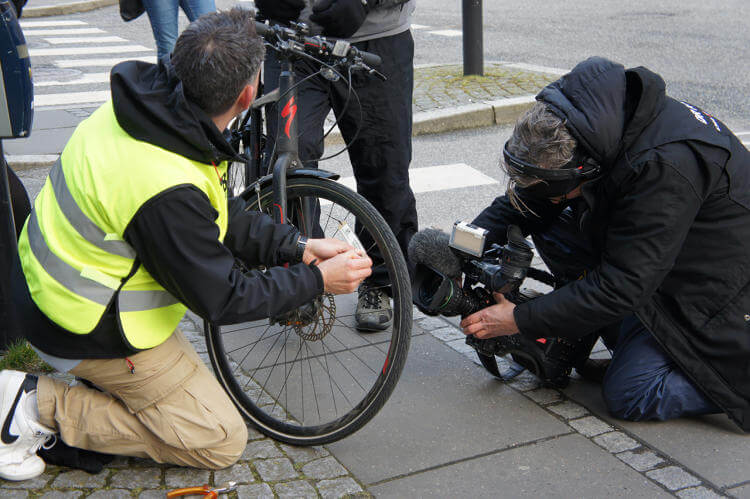 One city in Denmark has pulled out all the stops to make perks for those who ride bicycles, hoping to turn more people towards the greener mode of transportation.  There is a bridge dedicated to cyclists, analyses showing how bikes are better for your health, and now an RFID tags to change traffic lights in their favor.  “Aarhus, Denmark’s second largest city, is currently running a trial where cyclists are given RFID tags that they attach to their wheels.  As they approach a junction, the tag sends a signal to a nearby reader, which in turn switches the light to green.  Cyclists never even have to stop, even as car drivers on the other side of the junction are brought to a standstill.“

Life has never been easier as a cyclist in Aarhus;  they always have the right of way and seem to take preference on the road.  It’s hard to say, though, that this tactic would work everywhere to convince people to make the switch from car to bike.  For example, in a city such as Aarhus it might work great.  But New York, on the other hand, might cause more problems with traffic jams as a large part of the population uses bicycle’s as their mode of transportation already.  With that many people able to use the RFID tags to change lights from red to green automatically, cars would never be able to make it through intersections.  In a suburban area, however, such traffic jams would likely not be a problem, but not a whole lot of people would be tempted to make the switch.  It is farther to get from one point to another in the suburbs as opposed to the city, and so the short time saved by being able to change a light automatically to green can easily be made up by the car’s simple ability to go faster than a bicycle.  There are also not many lights in many suburban areas, so the benefit would not seem to be a large one.

These points are just speculations, however.  It’s entirely possible that RFID enabled bicycles could drastically improve traffic flow and “green travel” in New York City.  There are a few other ways that traffic lights controlled in part by RFID tags could be useful.  For example, many emergency vehicles use optical based preemption to control the lights in an emergency (some already use radio frequency).  Theoretically, RFID could be used just as well to control this traffic pattern as well as indicate where the emergency vehicle is as it passes each reader at different intersection.  RFID lights could also be used in the case of funeral processions, giving each car an RFID tag for the drive.  This would help to make sure that the procession stays together the entire time and is not broken up by a traffic light turning red.  Making this automatic would save someone a lot of time and energy.  Again, though, these are just ideas.

I’m not sure if I’d be inclined to ride a bicycle instead of drive a car if it meant I never had to stop for a red light again.  It’s normally a 15 minute drive to work for me taking mostly highways.  If avoiding a red light at the 3 intersections I go through on the way means riding a bicycle in the middle of winter in New England… I’ll keep my car for now.