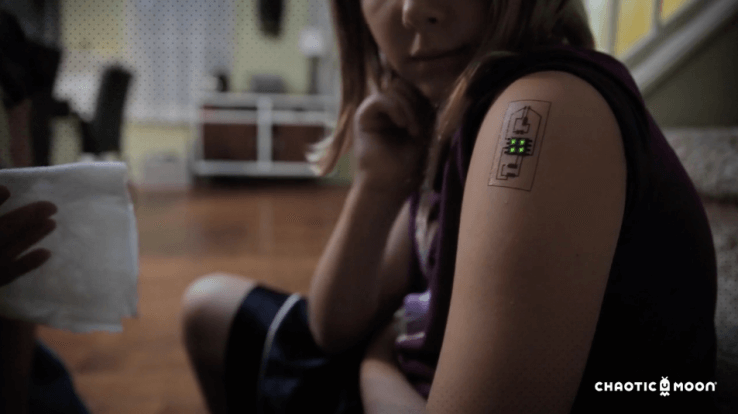 iPhones.  Excessively long beards paired with a “man bun”.  Emoticons.  There are lots of trends out there and likely will always be.  Many people follow more than one fad at a time and are always looking for the next big thing.  What if the next big thing is actually combing two fads into one?  Say, fitness trackers and tattoos?

Body art, such as tattoos and piercings, were frowned upon until recently. Now body modification is completely normal and almost expected of most people.  The recent movement towards staying active and eating healthy has lead to the booming industry of wrist-worn fitness trackers such as Fitbit and Jawbone.  A company called Chaotic Moon Studios has a new invention that combines these two trends into an extremely extensive yet convenient piece of technology:  the Tech Tat.  Tech Tats allow for all of the monitoring a normal fitness tracker would, but also provides more.  While it is still in the prototype stage, Tech Tats have the “ability to monitor body temperature and detect if someone is stressed based on sweat, heart rate and hydration level information uploaded via Bluetooth or location-based low-frequency mesh networks.”  The tattoos also have the ability to track location, such as for children at an amusement park.  Chaotic Moon believes one of the huge benefits of Tech Tat, though, could potentially be for the military by way of detecting poisons in the air, pathogens in a soldier’s body, and identifying when they are hurt or stressed.

Tech Tat can send any of this health information anywhere it needs to go, such as heart rate and body temperature directly to a doctor, essentially eliminating the need for annual physicals;  if a problem with any monitored fitness information is detected, the doctor will be notified.  It also makes monitoring health information in hospitals much more convenient, such as a child’s vitals after surgery.

And better yet, application is simple.  Unlike traditional tattoos, the user doesn’t need to sit in an artist’s chair for hours being poked with needles.  Instead, Tech Tats are applied much the same way a temporary tattoo is and lasts up to one year, yet can be removed at any time.  Skin mounted components and conductive paint are used to create circuitry, and was described by Chaotic Moon CEO Ben Lamm as a “slightly more protrusive tattoo with a bunch of chips on it.”

So why go for the Tech Tat as opposed to a fitness tracker you simply strap to your wrist?  To start, convenience.  With a Tech Tat, the user simply needs to apply once a year and they’re set as opposed to a Fitbit that requires being taken off and having the battery charged on a regular basis.  Tech Tats also offer a much larger coverage of information than its wrist-worn-counterparts.  As opposed to monitoring heart rate and temperature, Tech Tat also monitors hydration level, stress, location, and the potential for even more because of it’s placement directly on the skin.  The tattoos allow for information to be sent directly to doctors or other personnel who may need it, such as in a military setting.  Tech Tats, finally, provide a “best of both worlds” approach to fitness tracking between a wristband tracker and implanted one (yes, there really are people who have technological implants such as RFID chips from Grindhouse Wetware).  The technology allows for the accuracy and detail of an implant but the shorter commitment time of a wristband.

“This is the new wearable.  The future of wearables is biowearables,” said Lamm to TechCrunch.  Chaotic Moon aims to focus on the next wave of tech for clients, staying ahead of the game and providing the future.  I suppose we’ll just have to see if this is a trend that catches on and sticks (hopefully longer than the one year the actual Tech Tat does).